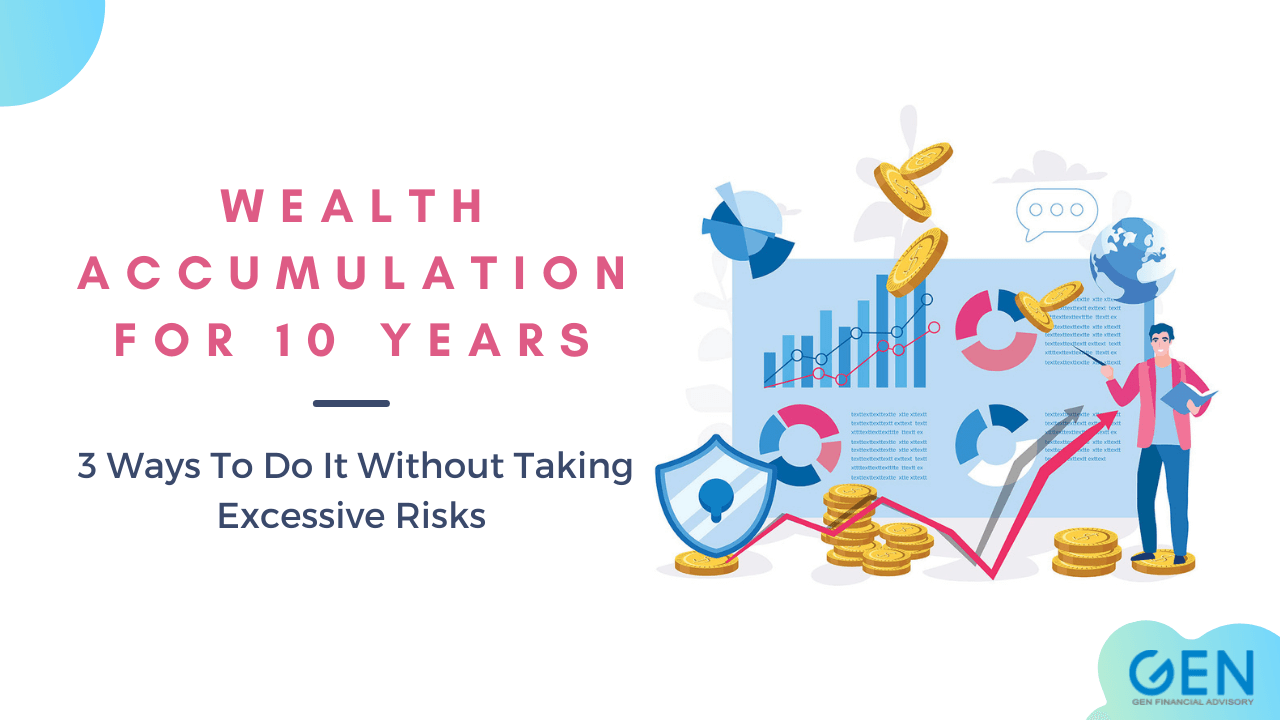 Me: Congratulations on your purchase. But why would you need a car? Our public transportation system can get us to where we want to go pretty much. What’s more, you’re a single guy.

Mr T: I just have a soft spot for cars. Given the car policy in Singapore, I’d have to get a new one ten years later though.

Mr T: How to save for that?

Me: There are some financial options

Mr T: Tell me. Just don’t judge me on buying a car!

It is common for us to save or accumulate wealth with a specific objective in mind. For some, it could be saving for a new car. For others, it could be accumulating wealth to help towards the down-payment for a private property, or putting the children through tertiary education.

For someone of a more mature vintage, the savings consideration might be for a nest egg which can be tapped into for a celebratory round-the-world trip upon retirement. There are also people who are just saving for the sake of, well, saving, with a 10-year target figure in mind.

In any case, ruling out cryptocurrencies, and focusing on more conventional and ‘old school’ financial-based solutions, we can focus on three ideas for saving or accumulating wealth over a 10-year period.

There are numerous considerations at play, and to be concise, I will focus on the financial pay-off here.

These have been in the market for the longest time, and are offered by insurance companies. The structure of an endowment plan is such that a policyholder contributes a regular amount (known as a ‘premium’) over a period. The premiums go towards the insurer’s pool of funds (known as ‘participating funds’ which invest in fixed income and equities).

At the end of the policy term, the policyholder receives a lump-sum from the insurers which include a guaranteed amount, and a maturity non-guarantee amount mainly based on bonuses. The participating funds are projected at 3% and 4.25% returns, and these returns affect the bonuses distributed.

These, ubiquitously known as ‘ILPs’, have also been in the market for a while, and are also offered by insurance companies. They are, at the core, insurance solutions. Investment components are packaged within these ILPs and hence, are most suitable for those who are looking for some protection but at the same time, seeking an avenue to grow financial resources via investment funds, which invest in equities or bonds, or both.

Given that the common denominator with endowment plans is insurance-based, people who adopt ILPs will also need to commit themselves over a longer term to reap rewards. Premiums can be single or regular, and are used to purchase units in the investment funds chosen.

For the purposes of comparing with other solutions here, we will focus on those with regular premiums. The surrender value will be contingent on the value of funds in the ILP, less any costs associated with exits.

There are also insurance charges and account fees deducted via reduction in fund units on a regular basis. Bonus and loyalty units are usually awarded, and as these increase with the tenure of the plan, the benefits of holding an ILP are enhanced with time.

This is a departure from the earlier two solutions, in that it is not an insurance-driven offering. A person who chooses this invests in a portfolio of investment funds through an investment platform. The value of investment portfolio will rise and fall in tandem with the investment funds, which are in turn influenced by the stock/bond holdings, much in the same vein as ILPs.

An investor has the option of making regular or a lump-sum investment into the funds chosen. The sum invested, after sales charge, will be used to purchase units in the investment funds. There is no insurance element with such solutions, hence there are no periodic insurance charges. However, there could be annual charges in the form of advisory and platform fees.

Here’s a table illustrating how the three solutions compared with one another, based just on projected pay-off, over 10 years:

For illustration purpose only. Click above image to enlarge.

3. ILPs – Figures taken off a Policy Illustration from a major insurer

4. As Policy Illustrations for ILPs display surrender values at 4% and 8%, we will also employ these rates for Platform Investment for comparative purposes.

5. Endowment Plan – Figures are taken off a Policy Illustration from a major insurer

Looking at this table, we can draw these observations:

1. Based purely on financial pay-offs, Platform Investment is superior to ILPs, given the same yield, over a 10-year period. This is not surprising as ILPs are structured to include some form of lock-in period (during which surrender incurs hefty charges), and that bonus/loyalty units accrue to the policyholder at a latter stage.

2. Even if Platform Investment were to perform at only 4% returns, the performance over a 10-year period will exceed that of an Endowment Plan, despite the latter performing moderately better at 4.25% (participating fund performance). Again, this is to be expected as insurance-based plans demand a long-term commitment from policyholders, with the first few years bearing the burden of expenses and deductions.

So, we have seen the range of returns across the three types of solutions when one is considering a 10-year financial goal. However, it will be too simplistic to just consider the returns. Other things that need to be factored include the risk appetite of the person, as well as the overall financial circumstance and aspiration of the person. Also, there is no perfect solution so it is imperative people also consider the shortcomings.

I have developed a checklist here, which you can use to decide on which financial solution is most appropriate for you as you embark on meeting your 10-year target. It is important that these be taken into account as, once a solution is implemented, it may be difficult to unwind.

(Download this checklist below which compares the factors across Platform Investment, ILPs and Endowment Plans!) 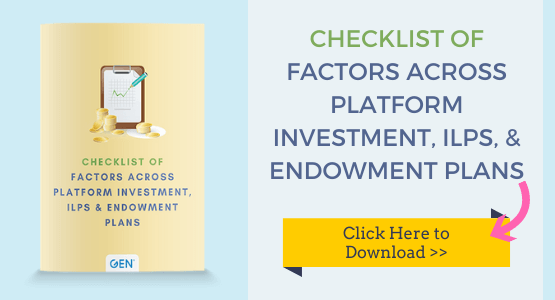 As with any financial solution, there is a need to structure to meet the needs and circumstance of the person. For example, for someone choosing Platform Investment or ILP, there is a decision on the funds to be chosen.

Reach out to your trusted advisor, who will be able to help guide through the decision making process as well as the options available for each solution!

We have seen that, over a 10-year period, Platform Investment might be a superior option in that it offers the largest potential of meeting or exceeding a 10-year financial target, as ILPs and Endowment Plans do require a long-term commitment. Over a longer-period horizon, the picture may be changed, as the bonus units in ILPs and the financial pay-off in an Endowment Plan can tilt the balance in their favour.

Your trusted advisor will be in a good position to provide you with guidance, based around your unique circumstance and needs, how best to engage a solution to help you meet your 10-year target!

If you want to know more about Weatlh Accumulation or any other enquiries, you may contact me through whatsapp, schedule an appointment with me or fill up the form below and I will get back to you as soon as possible.

Are Low Interest Rates Hurting Your Retirement Plans? What Low-Risk Alternatives Are There?

Financial Independence, Retire Early (F.I.R.E) – If being able to retire is tough in Singapore, is F.I.R.E possible?

The Big Drop – Investments in Unit Trusts – When Should You Consider Using Dollar Cost Averaging?

How Do You Know You are Financially Independent?